Art Institutions Exhibits & Events
August 23, 2018August 31, 2020 webmaster Fort Worth TX, museum relocation, museum reopening, western heritage
Views: 500
Fort Worth, TX…The National Multicultural Western Heritage Museum will open the doors of its new home located at the Cobden Building, 2029 North Main Street in the Historic Fort Worth Stockyards and Exchange District on Thursday, August 30, 2018, at 12 Noon!
The museum houses pieces of memorabilia, artifacts and historical documents celebrating men and women of all ethnic backgrounds who worked to settle the Old West as well as offering traveling exhibits, educational workshops, volunteer opportunities and family-friendly activities throughout the year. The new location boasts 8000 square feet of occupiable space. The museum will be housed on the bottom floor encompassing 4000 square feet of the facility.

Jim Austin, Co-Founder of the National Multicultural Western Heritage Museum, says the new location will be a tremendous asset for both the museum and lovers of the rich cultural history of the city of Fort Worth, “Moving the museum to the Historic Stockyards and Exchange area makes us more relevant to the history of the West and falls in line with similar museums and establishments around the country. With over 2 million individuals visiting the Stockyards annually, we anticipate a huge increase in traffic for the museum, and we are delighted to be in a position to share the incredible contributions of cowboys and cowgirls of all races with many more people.” Museum Co-Founder Gloria Reed Austin will continue to serve as the Executive Director. The Museum’s 2018 Board of Directors includes Executive Committee Members James N. Austin, Jr. (President), Victor Wallace (Vice President), Netra Fitzgerald (Secretary), Saul Waranch (Treasurer), Steven Heape (Director Representative), Gloria Austin (Executive Director) and Directors Mark Lucas Kelly, Sylvia McElvy and Shannon Reese. 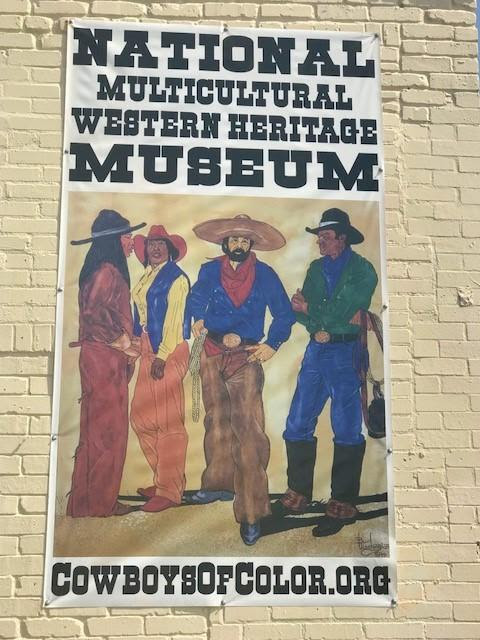 Over 100 years old, the Cobden Building, a two-story commercial building, was constructed in 1909 by William Bryce, a former Mayor of Fort Worth, for Alexander and Jessie Cobden. The property was owned by Jessie and her family until 1976. From 1912 until 1925, J.W. Alton Grocer occupied the ground floor while Southwestern Telephone & Telegraph Exchange was located there from 1914 to 1931. The building underwent extensive renovations following a fire in 1988 that destroyed the second floor. “The Cobden building has been an intricate part of the city’s economic and commercial history since it’s construction over 100 year ago,” continues Austin. “We welcome the opportunity to lease the second story of the building out for commercial use. It is a phenomenal location for an executive office or co-working suites location.”

Formerly located at 3400 Mount Vernon Avenue, the National Multicultural Western Heritage Museum has been committed to its vision of giving recognition to the outstanding pioneers who played a role in settling the early American western frontier since its founding in 2001 by Jim and Gloria Austin. The museum’s Hall of Fame also acknowledges individuals that have contributed to the western culture and tradition who still play a part in keeping this important piece of American History alive.
The Museum partners with many organizations within Tarrant County such as Visit Fort Worth; and, is a member of various chambers of commerce, museum associations, councils and organizations within Fort Worth.
Celebrate and experience this outstanding homage to the Old West at its new location in the Cobden Building at 2029 North Main Street, Fort Worth, Texas 76164. Hours of operation are Wednesday through Friday from Noon until 4 PM and Saturday from Noon until 5 PM. Admission is $10 for Adults; $8 for Sr. Citizens (62+) and Students with ID. Children 5 and under are free. Discount admission will be available for Groups of 10 or more and Veterans. For more information, or to sign up to be a docent or volunteer, call 817-534-8801, email gaustin@cowboysofcolor.org; or visit www.cowboysofcolor.org
About NMWHM
The National Multicultural Western Heritage Museum (NMWHM) (formerly the National Cowboys of Color Museum and Hall of Fame), a non-profit 501(c)(3) museum located in Fort Worth, Texas, documents the many positive accomplishments that multicultural cowboys and early frontier pioneers contributed to the settling of the western United States, through exhibits, workshops and lectures for youth and adults as well.
Facebook
Twitter
Pinterest
Email