Ro2 Art: On view and Upcoming : : This weekend, join us for The Nomadic Fungi Institute’s ‘Spore Sprouting Test’ opening this Saturday!

The Nomadic Fungi Institute has been conducting Spore Sprouting Tests to ascertain if Nomadic Fungus spores can be coaxed into germination and encouraged to grow in a laboratory setting. This exhibition represents the culmination of two years of research and offers a step-by-step guide to the scientific procedures used in these tests. Although the American government has yet to officially verify or for that matter acknowledge the existence of Nomadic Fungi, there is no doubt that a mutated, invasive fungus feeding on automobile components poses a very serious threat tohumanity.

Note: All lab samples contained within this exhibition have been sterilized according to the USDA Containment Guidelines and thus pose no threat to the public or their automobiles. 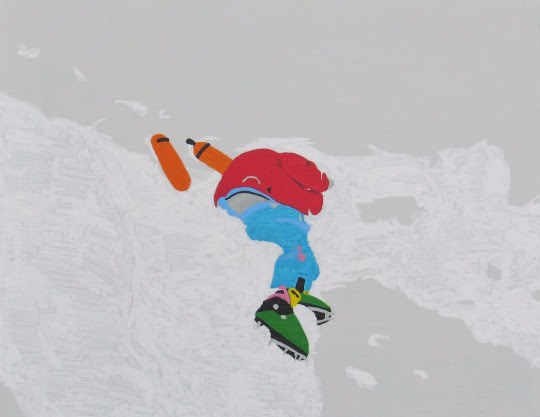 “My paintings are a representation of how ridiculous I think life can be. In some of my more recent works I’ve made fun of cheesy things, such as Tom Cruise and the show ‘Friends.’ I’m bringing attention to these things because I want the viewer to think about what it is they are looking at and why anyone would make a piece of art about this specific subject matter.

“I also like to include humor in the work. If my art can make people laugh and feel good, I’ve succeeded. The paintings are usually very bright and bold in color, and the subject matter can be a little bizarre. The use of brightly colored paint seems to curb some the strange imagery and make it more palatable to the viewer.

“Happiness and sadness seem to appear in the pieces simultaneously. A beautiful landscape can be accompanied by a small dead body, or a fun looking roller coaster can be surrounded by a bunch of dead bodies. Death makes me sad, so I try to make it seem less depressing.”

trapped in the fjord, so we had to walk everywhere 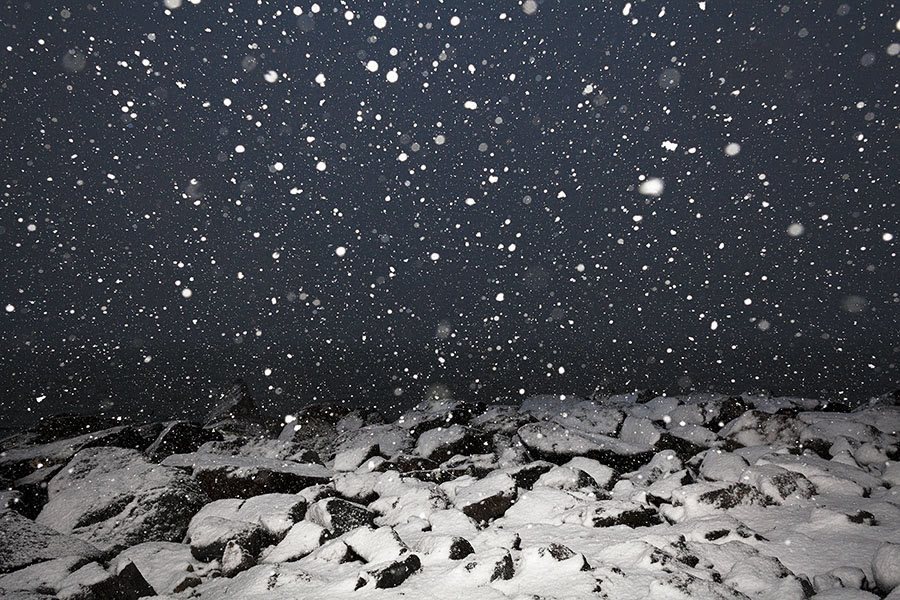 Driving and seeing the landscape from a car is vastly different than walking in it. The car acts as a divide between the viewer and the place. While walking in solitary, senses activate and your thoughts become louder. The natural and unnatural scents become prominent while time slows down to some sort of pacing, step after step evolving into a rhythm.

During an artist residency in Ólafsfjörður, a small town in northern Iceland, I photographed and documented moments on my walking paths. Walking was the only means of transportation for six weeks; it slowed time to an orchestrated repetition of white noise, revealing the beauty of this isolated town. Wandering enabled me to observe, hear, smell, and feel more attentively, thus resulting in a unique bond with the landscape. My thoughts became the cymbals, completing the piece.

Walking in the Fjord represents an organic visual meter of walking around in Ólafsfjörður; a small town nestled in the fjord. These photographs are memories of ambiguous moments and events that took place. Accompanying these images are text pieces and poetry written by my husband and myself during our stay. 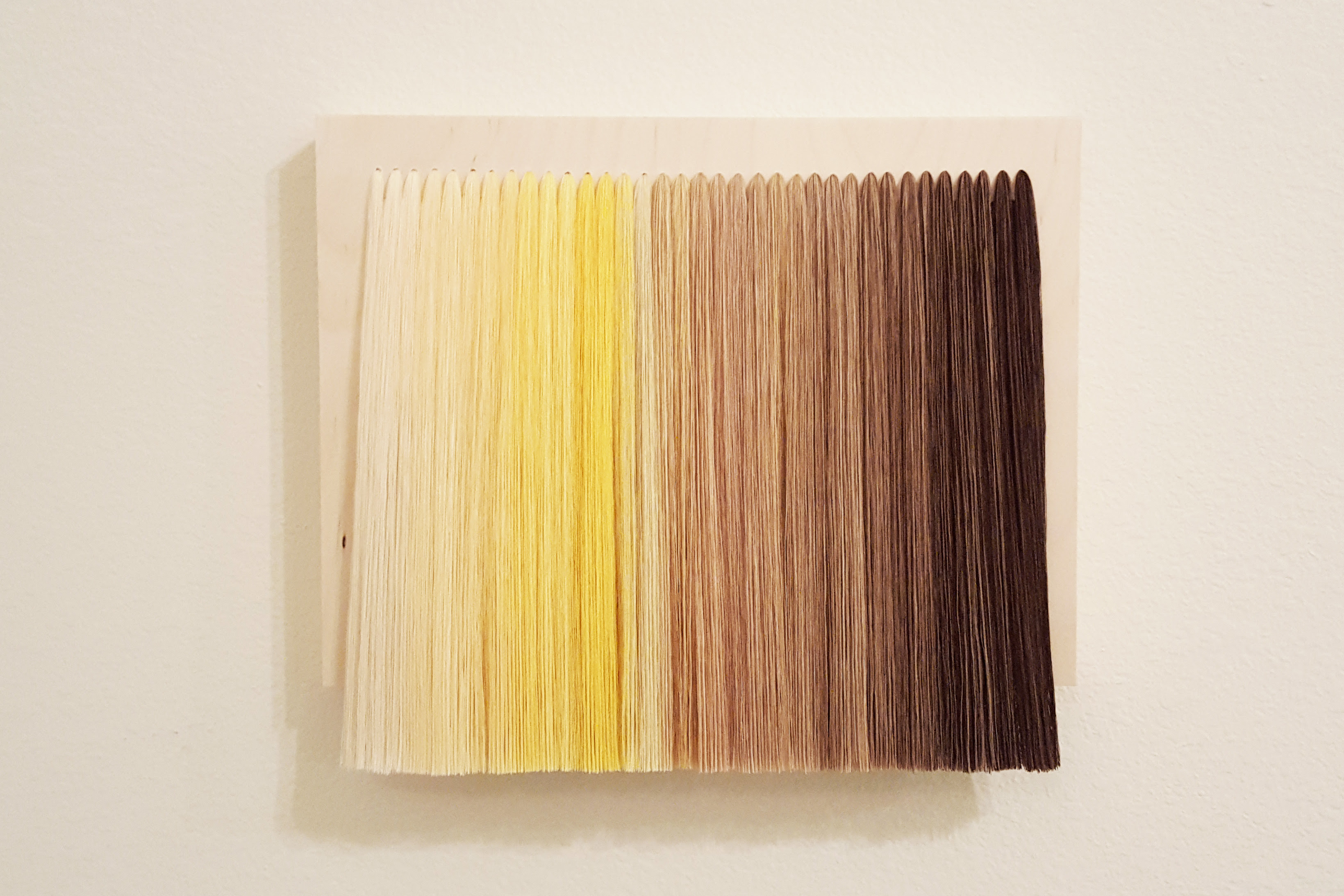 This body of work is a showcase of questions; an approach towards the idea of drawing in the expanded field. Kim explores the nature of line, and the potential held therein, to push the boundaries between the two-dimensional surface and threedimensional space. Thread and string are synonymous with the actions of weaving and stitching, both for utilitarian purposes, and to serve as metaphor, for the joining of two separate entities with efforts to repair what once was, or with the intent of becoming something other, whole and new.

The transformative power of materiality is at play in these works, and Kim has repurposed the context of thread and string, to emphasize the energy, delicacy, and grace of drawing. Both the weight of line as thin and singular, and the collection of lines en masse as solid form, are sensitive tools found in Kim’s repertoire; these are tools which have been exercised with skillful intent to build interesting forms, reminiscent of exacerbated versions of value studies, gesture drawings, or economical sketches one might find in the foundations of drawing. But that would be too reductive to let them exist still tethered to such a basic, albeit important set of concepts.

These works shift, undulate, and pulse into our space, promulgating themselves as entities emancipated from the confines of flatland, and now poised, vibrating, just
above the surface. Drawing has been personified, and is no longer limited to the index of the hand, or the illusion of the flat surface. It is an echo of a once sorrowful song, whose voice is present, tender, and alive.

Permanent link to this article: http://artgroupsdfw.com/exhibits-events/ro2-art-the-nomadic-fungi-institutes-spore-sprouting-test-opening-june-25-more/


© All art is copyrighted by the artist.. contact the Webmaster to participate: artnewsdfw@gmail.com